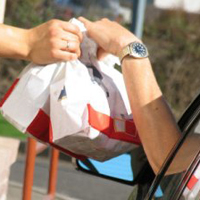 Fast Food. What To Order When You’re On-The-Go.

Sometimes you have to. You just do. You’re out doing errands, it’s past lunchtime and the kids are starting to whine—something needs to be done immediately before the wheels really start to come off. My friend recently told me that her mother used to pack sandwiches in the car for everyone if they’d be out-and-about during a mealtime. If you are one of those mothers, stop reading here. If you’re like me, and what I assume to be a large majority of parents who sometimes find themselves stuck while out doing errands, I will crumble directly atop my own healthy laurels and order something quick.

I bet you didn’t think they exist, but in order to make the best choices, I actually am one of those people who go home and look up the nutritional value of food from convenience restaurants. And guess what? There are items out there that aren’t horrible for you. Ok, they may not be organic. And they may not contain the daily allotment of fiber or leafy greens that you were hoping for…but hey, they will satisfy your (and your kids’) hunger and are a much better choice than fried chicken from a gas station (the epitome, I think, of the unhealthiest thing one could possibly eat).

Try out these menu items next time you’re on-the-go. Oh, and by the way, this information didn’t come directly from the FDA (although the nutritional values are accurate). When I’m weighing the “taste vs. how-will-I-feel-after-I-eat-this” factor, these are just my humble recommendations.

*Don’t Be Fooled: The grilled chicken sandwiches contain almost twice the amount of carbs and 30% more sodium than the above choices.

*Don’t Be Fooled: The low-fat blueberry muffin has a whopping 450 calories, 12 grams of fat and 77 grams of carbs (that’s more than the dreaded bagel which has gotten a bad rap for years!) And did you know that ONE munchkin is 60 calories and contains 2 ½ to 3 ½ grams of fat—EACH! Think of that before you pop a couple of those bad boys in your mouth next time.

*Don’t Be Fooled: Sauces contain a lot of hidden fat and calories! The Zesty Onion Ring dipping sauce has 15 grams of fat, as does the Ranch dipping sauce. Oh, and their Tendergrill Chicken Sandwich has just as many fat grams and calories as a double cheeseburger.

*Don’t Be Fooled: Completely avoid all salads here or anything from the “Volcano” menu which are all between 700-1000 calories and have a whopping 32-62 grams of fat.

Without stating the obvious, try to keep your fast food intake limited to “emergency snacks” that you can use as a hold-over until you have access to healthier options. And for both you and the kids, try to balance out the sodium intake with a cleansing water beverage instead of juice or soda.

On a side-note-safety-issue: Even when crunched for time, please don’t eat and drive. As we all know, kids need all kinds of stuff while they’re eating (napkins distributed, juice boxes punctured, ketchup packages opened, fallen food retrieved) which can be difficult and dangerous to perform while on the road—not to mention while you’re trying to eat, too! Take five minutes and pull into a parking space so that you can accommodate their needs and get a few bites in yourself. Anyways, have you ever tried to eat a taco while driving? Hello grease stains, arrrgh!