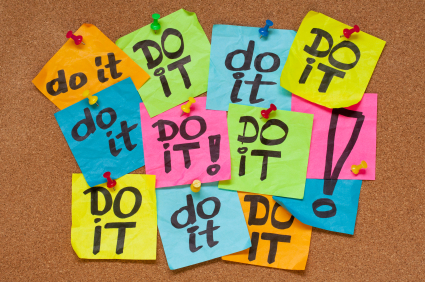 BlogGet Out Of Your Comfort Zone ChallengesStuff from the Blog

Get Out Of Your Comfort Zone Challenge: Stop Procrastinating!

I’m great at procrastinating. If one could make a living out of this, I would be a very wealthy woman. I didn’t used to be this way, not at all. But then life happened. Kids, work, house, school. Remember when dropping clothes off at the dry cleaner didn’t warrant a second thought? Now, I focus on taking care of the important things. Everyone is fed, laundry is clean and folded (however, most likely, still in laundry baskets) and the bills get paid. But what about all that other stuff? Those nagging little tasks that irk you on a daily basis, yet weeks can go by without you doing anything about it. That’s all changing for me this week. No more procrastinating. Like Nike, I’m just doing it.

Day One: Every morning I get up and think about exercising. Ick. Just get it out of the way, I tell myself. Just do it now, I say, before you even head downstairs and get caught up in emails and phone calls, reading the newspaper and seeing who’s on Ellen. FINE. I throw on my sneakers, flip on the TV and put on a workout from Comcast’s OnDemand. Thirty minutes later, my workout is done and I have a pep in my step all day knowing that my least favorite activity is out of the way and it’s only 9am!

Day Two: I haven’t been able to use my printer for over two months. Why? Because the ink ran out. I don’t know why the trip to Staples to purchase new ink is the equivalent to say, churning my own butter, but it is. Enough is enough. I remove the ink from the printer and head out. I walk in the store and hold up the cartridges to the first eager salesperson to approach me. Literally, two minutes and $35 later, I’m outta there. Like they say, That Was Easy.

Day Three: I’ve had three envelopes on my counter for over a week now waiting to get mailed. Problem? No stamps. That means…going to the post office. Getting two kids in and out of car seats, good times. But in the spirit of this little challenge, I go. Took an extra ten minutes out of my day and the stress of late correspondence evaporates. Aaaah.

Day Four: Showering is such a time suck for me. Since I have luxury of working from home, I often don’t leave the house and so having a good hair day isn’t #1 on my priority list. I’ve figured out why I detest it so much…I can’t multitask while getting ready. I can’t respond to emails while brushing my teeth. I can’t unload the dishwasher while drying my hair. Like exercising, I decide to ready myself for the day first thing in the morning. Then it’s done, and I won’t have to wear disguises to the supermarket anymore for fear of running into someone.

Day Five: My car’s gas tank is nearly empty, and it’s been raining for two days. Yuck! I find the inner most pump at a gas station with the largest overhead cover and illegally jam my gas cap under the handle so I can get back in my car and hide from the elements. Done.

Day Six: For the 1,000th day in a row, that mountain of “I-don’t-have-a-home” stuff is staring at me again from the corner of my kitchen counter. You know the pile…the 0% interest credit card applications, copies of photos that someone gave you, or your child’s evaluation from school that hasn’t yet made it into their baby book. Every day I look at that stuff and want it OFF my counter. That pile scratches at me like an itchy shirt tag—more than slightly irritating, but not enough to actually take off the shirt and cut it out. Well, today’s the day. I edit the stack like one going through her closet…if I haven’t needed it in 3 months, I’m throwing it away.

Day Seven: Haven’t I done enough this week? I’ve procrastinated watching the two Project Runway All Stars sitting on my DVR. I’m getting on that ASAP. And…folding this laundry simultaneously. Multitasking at its best!

What did I learn?

Are you a procrastinator, too? What kinds of things do you continually put off for later? Have any tips for motivating through a task list? Do share!