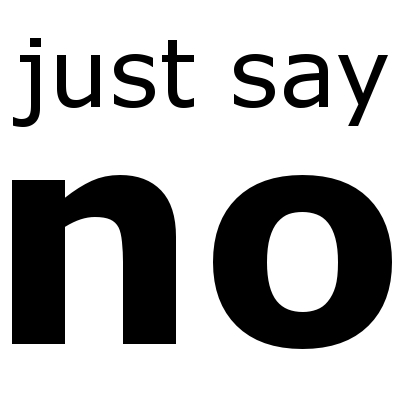 BlogGet Out Of Your Comfort Zone Challenges

Get Out Of Your Comfort Zone Challenge: Just Say No

I don’t say “no” a lot. I’m just not good at it. I want to make people happy. I want people to know that they can count on me. More importantly, I want to avoid confrontation at all costs, which makes saying “yes” so much easier. But is saying “yes” really easier, or am I actually making my life more difficult by taking on all this other stuff?

Often times, I actually like saying “yes”. When my daughter asks me to build a Lego house with her—YES. When my sister asks me to hang out on the couch with her infant son while she keeps the older kids busy—DEFINITELY. Or when a girlfriend asks me to go on an emergency mani/pedi outing—YOU BET. But then there’s the stuff you say yes to because you feel like you should, or you feel bad for them, or you actually don’t have anything better to do, and you end up saying “yes” when you really want to say, “hells no”. Watch out people, the amenable neighbor you’ve always known and loved has taken a sudden and unexpected vacation from being your “yeswoman”. This week is all about saying “no”.

The first “no” opportunity came out of nowhere. I had no time to whip up an excuse, no time to deflect or even simply hide. I was on the phone with an acquaintance of mine who lives about 20 minutes away and we were yakking about the weather, our complete lack of skin color, our drafty windows—you know, the normal winter-blues chatter. Suddenly she says, “Oh, by the way, I’m going away on a business trip for six days next week…can you come by once a day and feed my cat?” UGH. REALLY? Between having two kids and a full-time life, I don’t have the time or inclination to take one hour out of my day (for the next six days!) to check on a cat. “I’m really sorry,” I said with as much disappointment as I could muster, “but I just don’t have the capacity for that right now.” Wow. That felt good. “But hey, “I followed up, “my cousin owns a petting sitting company, why don’t you take her number?” Problem solved.

Next up? An invitation to one of those cooking parties (i.e. please-come-to-my-house-and-feel-obligated-to-spend-your-tightly-budgeted-money-on-culinary-tools-you’ll-never-use). This one was easy to decline. On the Evite, I responded with a simple “I’m still unpacking the ice cream maker that I received for my wedding, thanks anyways!” Hmmm, this is getting easier.

On Day Four of saying “no”, my son asked to buy a ginormous box of frosted cookies from the grocer. If I give in, I can completely avoid a tantrum in Aisle 10; however, I was pretty sure that I’d polish off the box myself that night while watching Cougar Town. Stay focused, I tell myself. “Not today buddy. Let’s check out the popsicles instead.” Ok, not technically a “no”, but close enough.

Finally, I was faced with the toughest “no” of all…a request from a family member. “Can you custom design and print an invitation to an anniversary party for about 65 people?” Ok, those invitations I made for my daughter’s first birthday really made an impression on everyone—but I’m a hack at this! After downplaying my barely-there design software skills, I mentioned how flattered I was and thanked them for thinking of me. Then I offered up the names of two former colleagues who I knew would be able to handle this job magnificently. I did say “no”, but in the end, they were happy with my alternate solution. Everybody wins!

Over the course of the week, I realized that the dread and guilt I always felt for wanting to say “no” was unnecessary in most situations. I’m not recommending that we decline any and all requests that we find the least bit undesirable (sometimes we have to say “yes”), but we also need to factor our own happiness and peace into the equation. And much to my surprise, I found that the impending disappointment and disdain that I fully expected to receive for saying “no” simply didn’t happen. Especially when you offer legitimate suggestions for other solutions. No one can fault you for that. YES!

Have you said “yes” to something recently when you really wanted to say “no”? What was it? Share with us in the comments box below.