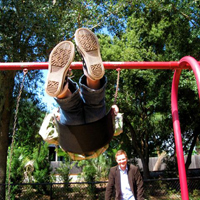 BlogFamily & ParentingStuff from the Blog

Tips on creating Active Families for the Lazy Person.

Everyone in my family, particularly in their youth, has always been thin. We were able to eat a lot, exercise rarely and diet never. But did that mean we were “healthy”? Not really. My family never hiked and I’ve never seen anyone, anyone, in my family take a running step unless we were about to miss the bus or were dashing to save a runaway grocery cart from smashing into my mother’s perpetually pristine car.

Because physical activity wasn’t prioritized for me growing up, I’ve continued to live a life of sporadic exercise. However, now that I’m a parent, what kind of lesson am I teaching my children? I must find a way to dismantle the Lazy DNA which has been deep-seated in my family for generations. Here are a few ways I’ve found to move ourselves away from the couch to the great outdoors. They may be obvious, but they’re also easy…and actually fun! I’m also showing my kids that staying active is important and, one day, it will be a lifestyle they share with their kids.

Play on the Playground. That Means You.
After spending many years following my toddlers’ every uneven step at the playground, they are finally old enough where they can play on their own and I can plant myself on a shady bench with a new magazine and an iced coffee…ah, bliss. I should be enjoying this, but now I feel lazy and guilty! So lately when we arrive at the playground, I’ll spend the first 15-20 minutes climbing the ladders, whizzing down the slides and criss-crossing the monkey bars right alongside my active mini-me’s. They think it’s a blast, I get some exercise out of the way and I don’t feel guilty when, after my 15 minutes of exertion, I escape to the adult oasis (see: bench, iced coffee, magazine) while they unknowingly continue to tire themselves out for an early bedtime. Win-win.

It’s Just Like Riding a Bike…
The two great things about riding bicycles are 1) it’s not that physically taxing (at least not where I ride) and 2) you never forget how to do it so there’s no fear of looking ridiculous. Ride around your neighborhood at a leisurely pace so you can still chit chat with your kids about their day, the weather, whatever. Are your kids not old enough to ride on their own? Keep an eye out for one of those bicycle trailers (I found ours at Target on clearance last year for $25!) and tow them around the hood. By the time you’re tired, they’ll be begging to go home for snacks anyways.

Put One Foot in Front of the Other.
Apparently, those long things sticking out below my torso can be used for more than transporting myself from the couch to the refrigerator. In the rare occurrence I’ve suggested a walk to my kids, I haven’t received an entirely enthusiastic response so I’ve tried to make it interesting by taking a walk somewhere we normally wouldn’t (in the woods behind our house, at the beach or around our local high school track). A change of scenery always gets my family energized for a new activity.

So, what now? I’m making a weekly activity chart and getting my kids involved with ensuring that we go outside to do something that resembles exercise for, at minimum, three days a week (hey, it’s a start!). It’s been said that workout-buddies are the key. Who cares that mine are 4 and 5 years old. Whatever works!